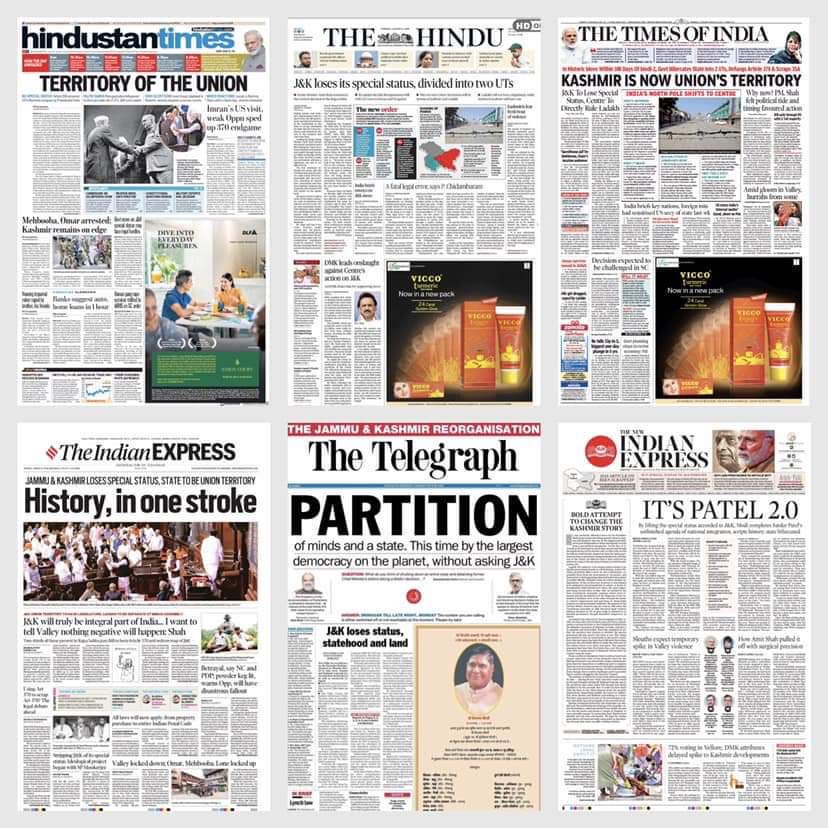 Abrogation of Article 370 Bill was passed in Lok Sabha yesterday. It was passed in Rajya Sabha on 5th Aug. The decision was very controversial and a long pending one. Just looking at the news paper clippings from India and Pakistan you can sense how important the decision was.

Former External Affairs Minister Sushma Swaraj who didn’t contest the 2019 General Elections due to health issues (she had undergone kidney transplant 2 years ago and was not in good health) tweeted at 7:23 PM congratulating the PM for scrapping the article 370.

What was supposed to be a historic day of celebrations ended as a sad day for the ruling party and millions of Indians.

It is well known that I am completely against the RSS (Rashtriya Swayamsevak Sangh) and the BJP (Bharatoya Janata Party), the party Sushma Swaraj belonged to. I am not a pro-Congress person (usually it is assumed that if you are not with “them”, you are a “Congressi”. I am not). I am anti-RSS and anti-BJP. And continue to do so even in the most unfavorable period (i.e. today) when, like Tigers, our species is on the verge of extinction.

Having said that there are very few people across the aisle which I admire. Sushma Swaraj was at the top of that list (Nitin Gadkari would be a distant second)! She was not a typical Sanghi or a BJP person. Partly because she was a woman (this can be debated, because we also have Smriti Irani and Meenakshi Lekhi and Kiran Kher, who are also women), but more likely because she was well educated (I mean, not “conditioned” only by the propaganda theory and “mythical version of history”). It’s not that she had not been corrupted by the bad qualities of RW – occasionally she did say or do something which was totally unlike her. But by and large she was a true Lotus within the RW mud.

She was an excellent orator! And I mean the real orator. There are two types of orators – those who have a style which masses like but no real substance, no domain knowledge/humility/sense of context to back it up (like our Pradhan Sevak – who is always obsessed with impressing people with his so-called oratory), and those who really understand the domain knowledge, speak earnestly (to express, and not to impress) and elevate themselves beyond politics – like Sushma Swaraj!

She was the youngest cabinet minister at age 25, first woman Chief Minister of Delhi state, first woman to be full-time Minister of External Affairs (and a great one at that) and many more firsts. But none of these labels can fully describe her personality. She was a real kind human being among ruthless RW bigots and trolls; and the difference was more stark because of this total contrast.

Here are a couple of videos of her oratory.

Lastly, here is a very good speech by Sushma Swaraj reciting Sanskrit and talking about greatness of Sanskrit. Do watch this:

P.S.: The above video is also important for another blog I want to write – which is about misconceptions and propaganda regarding Sanskrit. But some other time…