There is still a wide debate on exactly how many words English language has – some say its impossible to decide exactly while others say there are more than a million words already!
Here is the list of words that were competing for the Millionth spot: 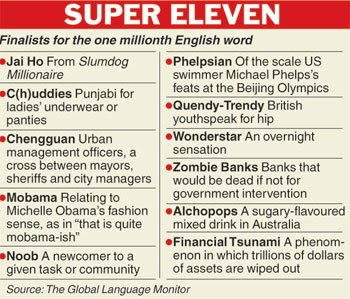 Global Language Monitor claims to keep track of these words.
And according to the results published by them – ‘Jai Ho’ has lost the race to ‘Web 2.0’. ‘Jai Ho’ stood at 2nd spot – thus becoming 999,999th word in English language.
——————————————————————-
Obama recently gave a wake-up call to his countryment when he said ‘Buckle up as the Indians and the Chinese are coming’
So Millionth word or not – it doesn’t matter. The fact is more and more Hindi words (and maybe other regional words thereafter) would make their way to English language.
So the one word the US and the rest of the English speaking people should adopt (and start using) is our very own filmy outcry – ‘Bachao!‘ 🙂