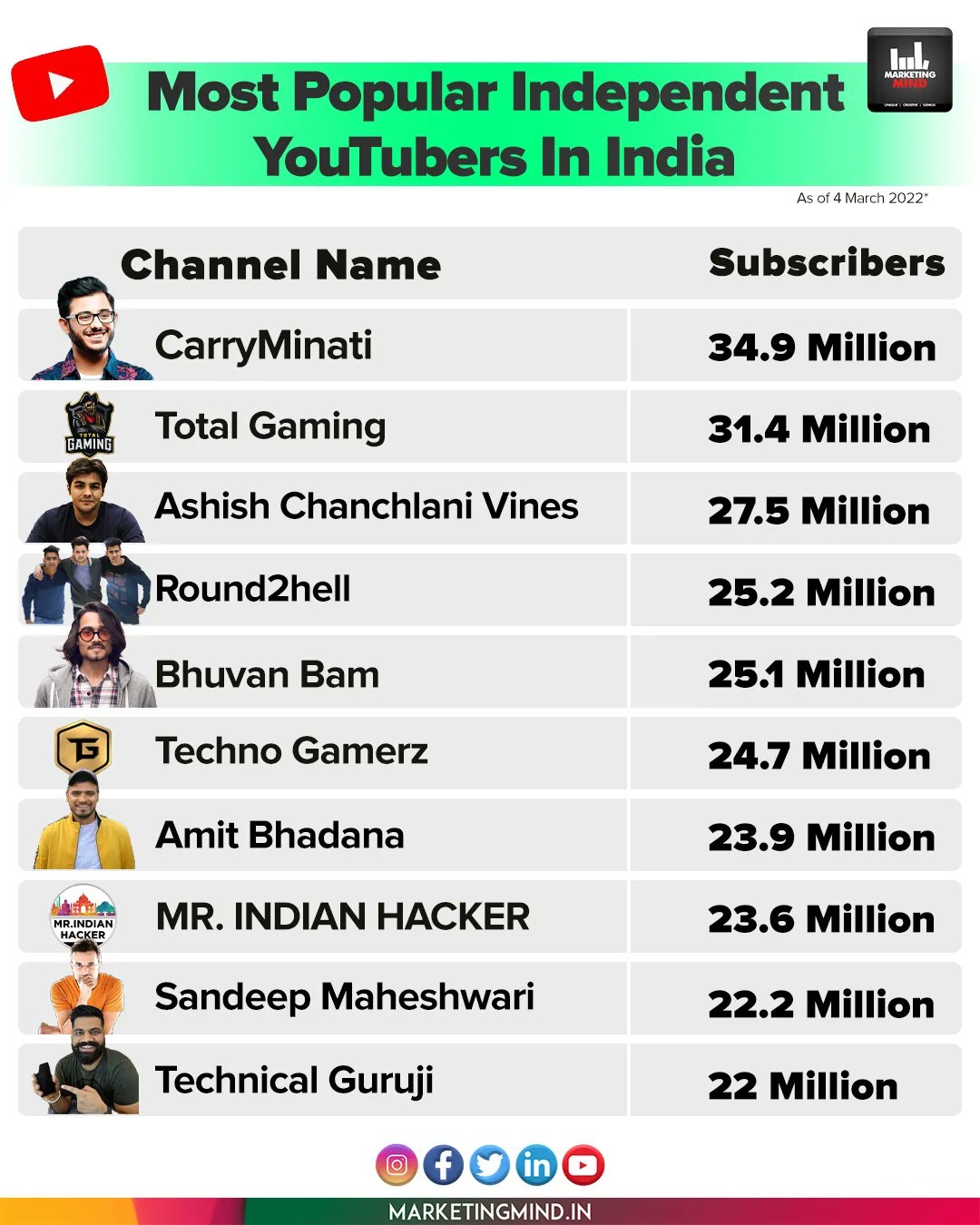 The recently published article in Mint made me write this post which I had been planning to write for a while. The report says that Youtubers added Rs. 6,800 Crore to Indian GDP in 2020. The report also adds that this section added 689,900 “full-time equivalent” jobs in India as per a report by a consulting firm Oxford Economics. To put it in perspective, India’s largest IT Services firm Tata Consultancy Services has 557,000 employees. Tata Motors has 81,000 employees. So the full-time Youtubers are more in size than TCS and Tata Motors combined!

However that translates to a paltry sum of ₹98,500 per Youtuber on an average. The average revenue per employee in case of TCS would be in excess of ₹40,00,000 or 40x that of an average Youtuber. That’s the quality of job differentiator.

India now has nearly 4,000 Youtube channels with more than 100,000 subscribers. Some of them have massive following.

This is just Youtube data. Then there are other content creators on Instagram or TikTok or other such Social Media platforms – who are also called “influencers”, because they supposedly “influence” the decisions of their followers. So if they market a product or advertise something, the expectation is that their dedicated followers/fans would buy it.

Now there is a fundamental principle underlying this (overhyped) phenomenon called Creator Economy. They exist because of two things:

(1) Network Effect of Platforms: Most of the Social Media tools are platforms, in the sense that they allow people to interact, share and reach out to a far wider audience. The platforms flourish because of inherent Network Effect. It means that the value of the whole network goes up when a node or a connection is added to the network because now there are so many new connections possible. You are on Facebook because everybody else is. Imagine if you are on another Social Media where it’s only you and maybe just a few others like you…would such a platform eventually work? No. It would be called “Orkut”. Facebook has become a giant because it has a billion plus users (I don’t know the exact count because I am not active on FB). Creator Economy can exist when there is the platform infrastructure in place.

(2) Creators don’t have to pay for the platform: The economics of the Social Media, as of now, is such that it’s free for the users. The platform makes money through some other means. Remember the popular Social Media maxim: “If you are not paying for it, you are the product”. However, it also means that content creators who start from the scratch don’t have to pay anybody for posting the contents and creating a follower base. They might figure out how to monetise the follower base later, once they achieve a critical mass (or someone else might help them). But, to begin with, it’s free for all. In that sense, it is said that Web 2.0 (Social Media, posting photos, videos, music, streaming, podcast etc) has democratised the internet.

There is a huge difference in the amount paid for viewership for the US content creators and for the Indian ones. Here is a sample comparison:

That’s a difference of 15x-20x. Which means that Indian Youtubers will have to have 15-20 times more views to earn the same money in USD as that of a US YouTuber. That might sound easy, but it’s not.

Firstly, the US population is just 1/3rd of India’s. Their internet penetration is very high, compared to the Internet users in India. Their contents have a global appeal and hence so much larger canvas to garner views. in case of India, the country itself is so fragmented (in terms of languages and tastes etc) that the actual viewership is much lesser.

Still, everybody is now hooked on to this buzzword called Creator economy. The craze is similar to that of a Telugu guy vying for H1-B or that of a Bihari guy for a Govt job (via UPSC).

It’s still early days of Creator Economy and only time will tell if it’s a real and sustainable pillar of GDP or a flash in the pan (like we had a book of Net Cafe as a business).

I want to write more about Creator Economy and my own aspiration of being a Content creator. But maybe some other time. Meanwhile, listen to this interesting (and looong!) episode on Creator Economy in my favourite podcast The Seen and The Unseen.